To share your memory on the wall of Robert \"Bob\" Pence, sign in using one of the following options:

Robert James Pence, age 72 of Prairieville Township, passed away on June 9, 2021. Bob was born on May 14, 1949 in Kingsley, Michigan, the son of James and Rosemary (Weber) Pence, who precedes him in death He is survived by his loving wife and best friend, Judy (Cremeans) Pence, whom he married January 17, 1969; children: TK (Jen) Pence, Kim (Todd) Raab; grandchildren: Rip, Isabelle, Katie, Ethan; sisters: Barb (Dick) Johnson, Linice (Woody) Justice, Janice (Mike) Cooper; sisters-in-law: Donna (David) Hackney, Patty (Mark) Chaput; special brother-in-law, Roger (Gwen) Cremeans; special niece and nephew, Crystal and Andy; special great niece, McKenzie; close friends, Paul and Pam Marlett, and Dan Anson; many nieces, nephews, cousins, and friends. Bob proudly served his country in the United States Army. After his time in the service, Bob worked as a foreman for Checker Motors before owning and operating Pine Lake Boat and Motor for 33 years, retiring in 2008. Bob served his community as deputy chief of the Prairieville Fire Department since 1988. He most recently was named the Fire Chief and just had the honor of the fire station named after him on June 7th. Bob volunteered at Fort Custer National Cemetery on the Thursday Honor Guard providing many veterans with their final salute. In his free time, Bob enjoyed fly fishing, hunting, spending time at his cabin in Watersmeet, and playing cribbage. Bob will be most remembered as a great friend who was always willing to help others in need. Bob's family will receive friends on Friday, June 11, 2021, 4:00 to 8:00 PM at the Williams-Gores Funeral Home. A funeral service will be conducted on Saturday, June 12 at 10:30 A.M. at Doster Community Reformed Church with Pastor Rick Christy officiating. Interment at Fort Custer National Cemetery. Memorial contributions may be made to the Prairieville Township Fire Department. Please visit www.williamsgoresfuneral.com to share a memory or leave a condolence message for Bob's family.

To send flowers to the family or plant a tree in memory of Robert "Bob" J. Pence, please visit our Heartfelt Sympathies Store.

We encourage you to share your most beloved memories of Robert "Bob" here, so that the family and other loved ones can always see it. You can upload cherished photographs, or share your favorite stories, and can even comment on those shared by others.

Corey, Falan, Rowan & Ryder Talcott, Mike Bush and family, and other have sent flowers to the family of Robert "Bob" J. Pence.
Show you care by sending flowers

Posted Jun 12, 2021 at 02:55pm
John Wells
Just found out about Bob He put my boat in and out for many years, it was our time to catch up on our fishing and hunting stories.
He was a great friend. I'll miss him
Comment Share
Share via:

Posted Jun 12, 2021 at 11:56am
Bob will be greatly missed. He was there for all my family's emergencies and my tragedies. I was so grateful for his presence in my life. My heart goes out to Judy and his family. Thank you for all you did for our community. It won't be the same.
Comment Share
Share via:
RG

Posted Jun 12, 2021 at 09:10am
Bob was a special person who for many years was my Deputy Chief at the Prairieville Township Fire Department. He hardly ever missed a meeting or an emergency call, unless he traveled to his UP cabin in "God's Country". Bob was one of the most dedicated Officers I had through the years and I respected his opinions and input on every fire related issue we encountered. Most of all Bob was a strong family man who's family came first, followed by his love for his friends and his strong desire to dedicate a large portion of his life to his community through the Fire Department. I never heard any complaint from him when calls came in at the wee hours of the morning, severe weather, or it being so cold you could hardly stand it. When I retired I couldn't think of no better person to fill the duties of our Fire Chief . Unfortunately it was short lived, but even in sickness it hardly slowed his desire to serve the community. I will always remember him in my heart and my condolences go out to his Wife, Children, Relatives and All his close friends who admired him for the kind and caring person he was.

Posted Jun 11, 2021 at 04:22pm
So very sorry to hear of Bob's passing. He was always welcome when he attended "The Wild Bunch Coffee Clutch" at Post 84 American Legion in Otsego. Rest In Peace Brother.
Jay Miller Post 84 Chaplain
Comment Share
Share via: 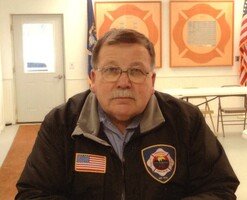