To share your memory on the wall of Russell Easey, sign in using one of the following options:

Print
A man with hands to say hello and hands to seal the deal. Russell David Easey Sr., 82, of Delton, Michigan passed away on May 2, 2021.

Born March 25th, 1939 in Barry County, Michigan to Richard and Dorothy Easey. Russ is preceded in deat... Read More
A man with hands to say hello and hands to seal the deal. Russell David Easey Sr., 82, of Delton, Michigan passed away on May 2, 2021.

Throughout his life, Russ held many positions. He was a livestock dealer, auctioneer, as well as time with Lacey Gravel Company, plus countless odd jobs in-between.

If there was a horse auction at Shipshewana, St. Johns, Sand Lake, Wayland and Lake Odessa Livestock sales, you were sure to see Russ there with a quarter in his hand to flip with you for a dollars.

He filled his days contesting horses, pulling ponies, pulling horses, horse trading and creating lifelong friendships through his infectious laughter and one of a kind story telling (partially due to the, occasionally incoherent, quick speaking of an auctioneer). A conversation with Russ might begin with “Did I tell ya the one about…” followed by many, many words that didn’t quite translate, and ending with giant, rolling belly laughs.

Russ was a livestock farmer through and through. Whether he was on the farm riding a horse drawn spreader, cutting and hauling wood, hauling a full load of livestock to the auctions, or winning awards with his priceless horses, Midnight and Comanche, where Russ was, a horse was never too far away. They were both his passion and his livelihood.

We can describe Russ in many ways, a traditionalist who dealt with cash alone, not putting his trust in banks, weatherman, computers or politicians. A talker, filling all the ears that would listen. A teacher, dealing out lessons about caring, being happy, making good deals and keeping them, and the hard truths of life on a farm. Soft hearted towards the little ones in his life. And compassionate; during the winter storm of 1975, Russ hooked a team of mules up to a bobsled and made his way into town, to make sure his family and neighbors would have the supplies they needed to make it through. Regardless of how you describe him, Russ will always be remembered as one of a kind man. Lastly, “if you figure out a way to make a million dollars, call me collect” was how he would end the conversation.

No funeral or visitation will be held at this time.

Please visit www.williamsgoresfuneral.com to share a memory or to leave a condolence message for Russ's family.
Read Less

There are no events scheduled. You can still show your support by sending flowers directly to the family, or planting a memorial tree in memory of Russell D. Easey Sr..
Plant a Tree

We encourage you to share your most beloved memories of Russell here, so that the family and other loved ones can always see it. You can upload cherished photographs, or share your favorite stories, and can even comment on those shared by others.

Posted May 05, 2021 at 03:58pm
So sorry to hear of Russ' passing. He was quite a character and always had good story to tell and make you laugh. When I was working the draft horse pulls, Russ would always corner me to flip for 5 or 10$. In all the times we flipped for money, I think we are both about even. I will surely miss seeing Russ at the pulls. RIP Russ.

Posted May 04, 2021 at 01:00pm
We remember the stories, laughter and fair deals sealed with a handshake. One of the all around good guys at the Wayland Auction.
Sue and Mike Johnson
Comment Share
Share via: 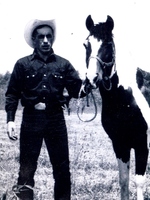