To share your memory on the wall of Leona Smith, sign in using one of the following options:

Leona J. Smith, age 99 of Middleville, has begun her new life in heaven, a life that we will enjoy together with her in the presence of our Lord. We are grateful for the hope that we have as Christians t... Read More
SMITH, Leona J.
Middleville

Leona J. Smith, age 99 of Middleville, has begun her new life in heaven, a life that we will enjoy together with her in the presence of our Lord. We are grateful for the hope that we have as Christians that to be absent from the body, is to be present with the Lord.

Leona passed away peacefully into God’s loving arms on Thursday, April 22, 2021 at Thornapple Manor, where she called home for the past seven years. Leona was born on May 29, 1921 in Grand Rapids to Clarence and Pauline (Verburg) Longstreet.

Leona moved to Middleville with her parents in 1932, and was a 1938 graduate of Thornapple-Kellogg High School. On June 16, 1944, Leona married Arthur D. Smith and together they shared 55 wonderful years together. In July of 1955 their daughter Paula Fay Smith was born, and at the age of 12 Paula went to be with Jesus.

Leona worked in a variety of different roles throughout her life including as a secretary at the Middleville Creamery, teller at Farmers State Bank and Hastings City Bank, secretary at Booth Insurance and at Gene Poll Realty until her retirement in 1990.

She was the oldest living member of the Middleville United Methodist Church. Leona was active for many years and served in many areas. She helped in Sunday school, junior choir, was the chairperson for vacation Bible school. Leona was a member of J.O.Y. Circle, Middleville United Methodist Women, holding offices in both groups, and was treasurer of the church for many years. She also sang in the choir and played in the handbell choir.

Leona was involved with the Order of Eastern Star, serving as Past Matron, life member, and Past Matron Club. She was a Past Queen and life member of Deir-el-Bahari Temple #67, Daughters of the Nile and member/past officer of Pythian Sisters.

Leona will be most remembered as a perfect example of a true lady. She was a kind, gentle, and an intelligent person with a giving heart.

Leona is lovingly remembered by her dear friends: Patti Mickelson, Dean Mickelson, Casey Mickelson, and Lucas Mickelson. Also surviving is a host of friends that have been special in their own way. Leona was preceded in death by her husband, Arthur, in 1999, daughter, Paula Fay Smith, in 1967, and her parents.

A visitation will be held at the Beeler-Gores Funeral Home in Middleville, MI on Sunday, April 25, 2021 from 1:00 PM to 2:00 PM. Leona’s funeral services will be conducted at 2:00 PM. A graveside service will be held on Monday, April 26, 2021 at Mount Hope Cemetery at 11:00 AM. In lieu of flowers memorial donations may be made to the Middleville United Methodist Church. Please visit www.beelergoresfuneral.com to share a memory or leave a condolence message for Leona’s family.

To send flowers to the family or plant a tree in memory of Leona J. Smith, please visit our Heartfelt Sympathies Store.

We encourage you to share your most beloved memories of Leona here, so that the family and other loved ones can always see it. You can upload cherished photographs, or share your favorite stories, and can even comment on those shared by others. 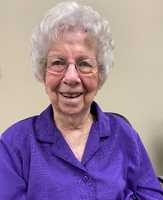