To share your memory on the wall of Lois Bremer, sign in using one of the following options:

Lois Corrine Bremer, age 94 of Middleville, took her final peaceful breaths on Easter Sunday, April 4, 2021 in her own bed surrounded by her loved ones. While all in this world may not have been prepared, Lois was ready to be called home by the Lord she loved and trusted. She is the last of the 12 children of Frank and Jennie Ruiter to join their parents in Heaven where she will also be reunited with her husband Thomas John Bremer, who passed in 1986 after 38 years of marriage, and her son Pastor Kenneth John Bremer who left this Earth a year ago.

Lois was born July 14, 1926, the tenth of Frank and Jennie's dozen children. She married Tom Sept. 25, 1948. Lois and Tom were introduced by Tom's older brother John in Chicago, and they were married within a couple years. After starting their family in Illinois, they were drawn to the edge of where the prairie meets the forest between Middleville and Yankee Springs. Lois' sister Alice Steiner lived there with her husband Fred “Fritz” Steiner. The two couples joined forces to settle in Michigan, with six children among them at the time. Lois and Tom moved into a home in town in Middleville where they lived until 1959 when they moved into the farm house neighboring Alice and Fritz. Lois and Tom lived there and raised their seven children over the next 30 years. Lois moved back to town after Tom's passing.

The two families shared the tradition of hosting a Ruiter Family Reunion each summer at their homes, a tradition that still lives on with more than 100 descendants of Frank and Jennie gathering each June.

As well as being a wife, sister, mother, grandmother, great grandmother and friend, Lois spent time as the recording secretary for the Village of Middleville planning commission, the Thornapple Township Board of Trustees and the Thornapple Township Planning Commission. She volunteered at Charlton Park for more than 20 years, worked for 11 years as the secretary at the Middleville United Methodist Church, and at the Sun and News for 17 years when the newspaper was headquartered in downtown Middleville. She regularly volunteered for community blood drives and to work elections at several local municipalities - and reportedly there were never any accusations of election fraud under her watch. She transitioned from the typewriter to the computer in her 80s when she was asked by the Village of Middleville to take the position of recording secretary for the planning commission.

Lois lived her faith with a servant's heart. She was raised Christian Reformed and joined the Methodist Church when she moved to Middleville in the 1950s. She taught Sunday school, helped with church bazaars, and was active in United Methodist Women. She was a part of the Snuggli Quilters and also enjoyed her time as a member of the Red Hat Ladies.

Lois was always surrounded by angels and sent them off on missions for all who needed them, whether they knew it or not. Not necessarily a thrill seeker, she took a guardian angel along herself for travels across the country to visit family and across the Atlantic to the Netherlands and eastern Europe. Lois took adventures in a hot air balloon, a stage coach, a glider and occasionally across Main Street near the Thornapple River on her battery-powered scooter with a great grandchild co-piloting on her lap.

Her life touched all the senses of those that came in contact with her. There were the tastes and smells of dozens of loaves of fresh white bread and cinnamon rolls on the table at home, glazed doughnuts in the United Methodist Church basement, a Wonka-esqe variety of hard candy during the holidays, pizza with cornmeal dusted crust on Christmas Eve, oilie koeken on New Year's Day, waffles for a Sunday supper and bacon buns, Swedish meatballs and kuglis at every conceivable family get-together (all recipes happily handed down to children and grandchildren). Rainbows danced across the kitchen from the sun-catchers spinning in her windows; red, blue, yellow and green bubble lights gave the illusion motion to her Christmas tree while reflecting their light off her milk glass collection; and brightly colored eggs danced on their strings in the wind as the lilac bushes began to bud each Easter. There was often the quiet hum of a hymn, a vibration one could feel as much as hear, as her rocking chair creaked in her corner where she had her windows out into the world. Around that world there are people snuggled underneath one of her quilts or supported by one of the mats she weaved out of repurposed grocery bags.

Lois is survived by her children: Mike and Janette Bremer, David and Colleen Bremer, Vicky (Idema) Bremer, Susan and Dave Enders, Frances and Daniel Tobin, Thomas and Brenda Bremer, and John and Kellie Bremer; 20 grandchildren; 31 great grandchildren; and an extended family tree with branches so wide and roots so deep that they won't fit on these pages. She was preceded in death by her parents, seven sisters and four brothers, as well as her husband Tom, son Ken and grandson John Ben.

A visitation is planned for Friday, April 9, from 3:00 to 7:00 p.m. at Beeler-Gores Funeral Home in Middleville. A funeral service is planned for Saturday, April 10, at 2:00 p.m. with the Reverend Dave McBride presiding at the Middleville United Methodist Church. A visitation will begin at 1:00 p.m., an hour prior to the service. Lois will be buried beside her husband Tom at Mount Hope Cemetery in Middleville at a private family service Monday. In lieu of flowers, contributions may be made to the Middleville United Methodist Church. Please visit www.beelergoresfuneral.com to share a memory or to leave a condolence message for Lois' family.

To send flowers to the family or plant a tree in memory of Lois C. Bremer, please visit our Heartfelt Sympathies Store.

We encourage you to share your most beloved memories of Lois here, so that the family and other loved ones can always see it. You can upload cherished photographs, or share your favorite stories, and can even comment on those shared by others.

Posted Apr 12, 2021 at 07:38pm
I did not know Mrs. Bremer. However, I read the beautiful obituary in the Banner and I was so moved. It was a written so beautifully and such a tribute that anyone clearly knows what a special person she was. My heartfelt condolences to the family. You are a gift to each other. God Bless.
Carla Wilson-Neil
Comment Share
Share via:
T

Posted Apr 12, 2021 at 06:25pm
Lois and I were in the same BSF class and I got to know her quite well. She was such an inspiration! Always smiling and full of energy! Myself and another BSF sister went to her grandson’s wedding to see Lois walk down the aisle as the bride and groom’s flower girl! It was so exciting to watch Lois get ready for the big entrance! She was like a little girl! Lois had a true zest for life and it inspired me to do the same! So happy you are with Jesus! I hope you have a chance to meet my Kenny! Much love and gratitude to a wonderful friend and sister in Christ! Thelma Rozema
Comment Share
Share via:
ME

Posted Apr 12, 2021 at 12:53pm
Lois was close friends with my Grandma, Alice Steiner. The love these two sisters shared is inspiring decades after my grandma's death. I know they are together again. It was a beautiful funeral. I watched the service online from Florida inside a church. I was overwhelmed at how many were able to attend during COVID-tide. Such love without judgment. If I can be one-tenth of the Christian Lois was then truly amazing things will happen.
Comment Share
Share via:
SH

Posted Apr 09, 2021 at 12:05pm
Lois was a true inspiration to everyone who knew her. I remember the first Christmas after my daughter died, I was invited to Lois's house to see her angel tree. That visit and the angels she gifted me with, helped me through the most difficult journey in my life. I will always be thankful for her kindness and understanding. She was a gift to all who knew her. I know she is celebrating with Jesus now.
Comment Share
Share via: 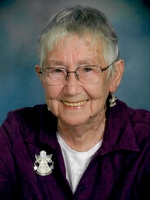