To share your memory on the wall of Steve Cutler, sign in using one of the following options:

Steven Todd Cutler, age 52 of Middleville, passed away on February 7, 2021. Steve was born on December 7, 1968 in Hastings, the son of David and Janice (Strumberger) Cutler. Steve proudly served his country in the United States Marine Corps. While attending Thornapple-Kellogg High School, Steve excelled in wrestling and football and earned his PHD (plain high school diploma) before going to work for Bradford White as a supervisor for 21 years, retiring in 2009. After retiring, he was a bus driver for Thornapple-Kellogg Schools and spent time in Gulf Shores. Steve was an avid outdoorsman, he enjoyed hunting, fishing, canoeing and camping, especially at Indian Valley Campground where his family had a yearly spot. He was a loyal Detroit Lions and University of Michigan fan. Steve will be remembered for his big heart and dedication to his family. Steve is survived by his wife, Cheryl (Scutt) Cutler; children: Andrew (Nicole) Roy, Elizabeth (Christopher) Lilley, Paige Cutler, Evan Ellsworth, Amber Ferris, Emily (Josh Shanks) Ellsworth, Jacob Cutler, Fira Cutler, and Rose Cutler; grandchildren: Clarabelle, Nova, Cameron, and Gaige; sister: Roxane Friend; a niece: Jessica (Jack) deBlecourt, and a nephew: Shane (Faryn) Cutler. Steve was preceded in death by his parents; and a brother, John Cutler. Steve’s family will receive friends on Friday, February 12, 2021 from 4:00 PM to 8:00 PM at the Beeler-Gores Funeral Home. Please visit www.beelergoresfuneral.com to share a memory or to leave a condolence message for Steve’s family.

To send flowers to the family or plant a tree in memory of Steve T. Cutler, please visit our Heartfelt Sympathies Store.

We encourage you to share your most beloved memories of Steve here, so that the family and other loved ones can always see it. You can upload cherished photographs, or share your favorite stories, and can even comment on those shared by others.

Posted Feb 15, 2021 at 02:19pm
Extending our sincerest sympathy to you and your family at this time of sorrow

Flowers were purchased for the family of Steve Cutler. Send Flowers

Posted Feb 11, 2021 at 02:17pm
Our deepest sympathies to you and your family, Jacob. Our thoughts and prayers are with you.

Flowers were purchased for the family of Steve Cutler. Send Flowers 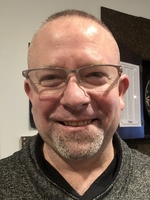