To share your memory on the wall of William \"Bill\" Kenyon, sign in using one of the following options:


William “Bill” Edgar Kenyon, age 89 of Middleville, passed away peacefully in his sleep at home on December 22, 2020. Bill was born on June 2, 1931 in Thornapple Township to Arthur and ... Read More
Kenyon, William "Bill"
Middleville


William “Bill” Edgar Kenyon, age 89 of Middleville, passed away peacefully in his sleep at home on December 22, 2020. Bill was born on June 2, 1931 in Thornapple Township to Arthur and Angeline (Williams) Kenyon. Bill was a 1950 graduate of Thornapple Kellogg School. On April 21, 1951, he married Neva Bryans, and together they shared 69 years of marriage. For 27 years, Bill worked with his brothers as a mechanic at the Central Garage that his father owned. They were proud to sell and service Pontiac vehicles and GMC trucks. Bill owned a 1926 Pontiac, that his father Art Kenyon had acquired. Later, Bill worked for the Village of Middleville for 10 years. Bill was proud of his community and served in various roles such as on the Middleville Village Council for 12 years, and as a Thornapple Township Trustee for eight years. Bill was a member of the Middleville United Methodist Church. He was also a charter member of the Middleville Lions Club and was involved in the Middleville and Wayland Snowmobile Association, serving as a two-time past president. In 2004, Bill and Neva moved to the Kenyon Centennial Farm. Bill enjoyed golfing, playing cards, putting together puzzles, and camping. Bill is survived by his wife, Neva Kenyon; children, Gayle Anne (Douglas) Henning, David (Peg Fox) Kenyon; grandchildren, Dan (Katie) Kenyon, Philip (Christy) Kenyon; great grandchildren, Bryce and Grahm Kenyon; brother, Rodney Kenyon; many nieces and nephews. He was preceded in death by his parents; siblings, Robert (Donna) Kenyon, Charlotte (Rodney) Finkbeiner; sister-in-law, Carol Kenyon. A private service has been held and burial will take place in Mt. Hope Cemetery. A public Celebration of Life service will be held at a later date. Memorial contributions may be made to Middleville United Methodist Church or the Middleville Lions Club. Please visit www.beelergoresfuneral.com to share a memory or leave a condolence message for Bill’s family.
Read Less

To send flowers to the family or plant a tree in memory of William "Bill" E. Kenyon, please visit our Heartfelt Sympathies Store.

We encourage you to share your most beloved memories of William "Bill" here, so that the family and other loved ones can always see it. You can upload cherished photographs, or share your favorite stories, and can even comment on those shared by others. 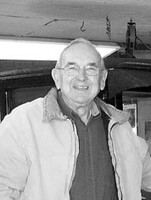