To share your memory on the wall of Lucille Pearson, sign in using one of the following options:

Luci was a generous and devoted wife, mother, grandmother, and friend. She was born to Walter Clyde and Mildred (Pell) VanHoven in Grand Rapids, Michigan in 1943. Luci fell in love with music after her father took her to a music store and bought her a flute. She also learned to play the piano, the chimes, and the organ. She attended Western Michigan University where she continued to explore art and music while also earning her degree in education.

During her first years of teaching, Luci met the love of her life, Jack Harry Pearson. They married in 1968, and eventually moved to Richland, Michigan to raise their two children, Annette and Steyn. Luci returned to Western Michigan University to earn her Master’s in Education. She carried her love of art and music into her classroom. She taught kindergarten for 30 years, spending most of her teaching career in the Portage School District.

After retiring from teaching, Luci continued to teach and tutor in reading and music. She also explored various art forms throughout her life. She crocheted, knit, quilted, embroidered, painted, sketched, and created beautiful stained glass pieces. She played music in the church, in the New Horizons Band, and at weddings.

Luci felt most at home by water, especially at Gun Lake. She was introduced to the waters of Gun Lake when she was 15 years old. She became an advanced swimmer and was on the synchronized swim team at Western.

Jack and Luci bought a cottage on Gun Lake when they were first married and every June, Luci packed the car on the last day of school to take her family to their Gun Lake cottage for the summer. After retirement, Jack and Luci built a home where their cottage once stood. They lived on Gun Lake year round and enjoyed visits to Portland, Oregon and Colorado to spend time with grandchildren. While at the lake, she savored time collecting rocks for her flower berms, tending her garden, designing and making stained glass. Mostly she liked watching the beauty of the seasons unfold. She also was a member of the Gun Lake women’s club where she contributed her knitting and sewing.

One of her lasting legacies will be carrying the torch for the “Ring of Fire.” For the Fourth of July, she encouraged her neighbors to participate by lighting flares along their property’s water edge after the fireworks. She would catch up with folks while taking orders for their flares and delivering them before the beautiful display in the bay of West Gun Lake. On the night she passed away, her beloved neighbors and her family lit their flares in celebration of Luci Pearson’s life.

There is no memorial service planned at this time. Donations in her memory can be made to Hospice of Michigan. Please visit www.beelergoresfuneral.com to share a memory or leave a condolence message for Lucille’s family.
Read Less

There are no events scheduled. You can still show your support by sending flowers directly to the family, or planting a memorial tree in memory of Lucille V. Pearson.
Plant a Tree

We encourage you to share your most beloved memories of Lucille here, so that the family and other loved ones can always see it. You can upload cherished photographs, or share your favorite stories, and can even comment on those shared by others.

Posted Dec 22, 2020 at 11:45pm
We loved this wonderful lady since she and Jack decided to come into each other's lives and make their union in life a forever one. She soon became an added sister to the Derhammer family. We will miss her smile, kindness, beauty forever. We thank God for the years she shared with us and are happy her trials are over,she is healed and in the arms of her Savior. Love and healing to Our brother Jack and the family. ❤️🙏🏻
Comment Share
Share via:
JV

Posted Dec 21, 2020 at 05:17pm
Jack, Annette and Steyn, I am so very sorry to hear of your loss of your beloved wife and mother. I remember seeing Mrs. Pearson lead her classroom down the halls of our elementary building, and she was always smiling at everyone whether she knew them or not. She was truly an angel on earth! I had the great pleasure to also meet and get to know your family-mostly Steyn! My mom watched Steyn at our home when I believe Steyn was 5 years old while Mrs. Pearson was at work. What a joy it was to have Steyn at our home! The kindness and the caring ways were definitely a part of the Pearson family through and through. My family's prayers are with your family. From a long ago admirer of the Pearson's! Jill Verscheure, formerly Jill Jaquays
Comment Share
Share via:
GH

Posted Dec 21, 2020 at 09:46am
I was very sorry to learn of the passing of Lucille. Lucille and I went to High School together and sat next to each other in Band.
We became close friends and I have many fond memories of our time together during those High School days.
You have my deepest sympathy during this time of loss.
Gordon Henry
Class of '60
Comment Share
Share via:
A

Posted Dec 20, 2020 at 11:23am
I was very sad to learn of Mrs. Pearson”s passing. She was the kindergarten teacher for my three daughters. They all loved her and she gave them a wonderful start to their education. For Christmas she made sweet Christmas wreaths with a picture of each child and every year when I decorate my tree I an grateful to her. God bless your family and give you comfort.
Comment Share
Share via: 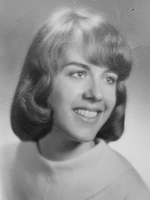