To share your memory on the wall of Daniel Parker, sign in using one of the following options:

To send flowers to the family or plant a tree in memory of Daniel R. Parker, please visit our Heartfelt Sympathies Store.

We encourage you to share your most beloved memories of Daniel here, so that the family and other loved ones can always see it. You can upload cherished photographs, or share your favorite stories, and can even comment on those shared by others.

Vicki en Jacobus, we will miss you. and The Howarth family sent flowers to the family of Daniel R. Parker.
Show you care by sending flowers

Posted Dec 17, 2020 at 11:59am
I am so sorry for the loss of Dan. You all are in my thoughts and prayers. I did not know Dan well but know he was a very good man.
Rich Brown
Comment Share
Share via:
SF

Posted Dec 17, 2020 at 11:20am
Dan was an outstanding person. I have worked with him on rotary, senior class parties and business. I have been hosted at his home. Linda and family my thoughts and prayers are with you. I am currently out of state so I will be unable to attend the visitation but know that I truly respected him. I am very thankful that he knew the Lord because we have the assurance that we will meet again.

Posted Dec 16, 2020 at 07:04pm
There are no words for the loss of this Great Man. I worked with Dan on some publishing's yrs. ago had the pleasure of knowing him. Got me involved with CASA. Since moving to Garden City had loss touch. So Sorry. They were so excited when they became Grandparents, He loved his family and friends, most important God. Know he will always be watching over his loved ones.
Comment Share
Share via:
KH

Posted Dec 16, 2020 at 05:47pm
Linda, you and your family have my deepest sympathies. May God give you strength in the coming days.
Comment Share
Share via:
BE 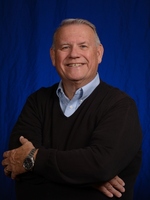