To share your memory on the wall of Jack Mills, sign in using one of the following options:

Mills, Jack Lee Sr, 84, of Delton, Michigan (and Bradenton, Florida) passed away unexpectedly from complications of Covid, at home overlooking a cherished and scenic lake, on Saturday, November 28, 2020. He was born in his Grandmother’s home in Kalamazoo, Michigan on August 25, 1936, the eldest child of Raymond and Edith Mills (Madgyesi). He grew up in Kalamazoo and graduated from Kalamazoo Central High School in 1955. He served in the United States Navy for two years before being honorably discharged with an early option to attend Ferris State College. He and Sally Mills (Mertz) were united in marriage in 1958, and together raised four children. Sally preceded him in death in 1995. Jack married his loving wife, Judith JoAnne (MacGillivray) in 2000, who survives. Also surviving are his four children, Linda Mills-Kuiper (Bob), Shelly Mills-Heuser, Jack Mills Jr. (Jennifer) and Patricia Mills-Adams, eight grandchildren (Bobbie, Sally, Benjamin, Jonathan, Laura, Jillian, Ty and Isabella), two great-grandchildren (Adrian and Elle). Also surviving is his dear sister Rayleen Knack as well as many cousins. He was preceded in death by his grandson Logan in 2010 and nephew Randall in 2011. In addition, he also had the privilege and joy of welcoming his wife’s daughters (Kari, Katie, Jennifer, Jessica) and five grandchildren (Matthew, Ella, Grace, Jack and Cameron) into his life.
Jack spent his professional career working for North Central Airlines (Republic, Northwest, Delta) and ultimately retiring in 1993. He was also part owner and Vice President of Kuiper Brothers Self-Storage, Inc. Jack was a family man first and foremost. In addition, he was a generous man, giving of his time, talents, and resources. In 1976 he moved his family into a treasured home, which he built, on Guernsey Lake in Delton, MI. He was the host of many, many family reunions, events, a wedding, and a private family/friends “campground”. Four generations of his family participated in summers at the lake! For the past 25 years he has spent the winter months in Bradenton, FL in his beloved community River Isle.

An in-person memorial service will be delayed until spring/summer 2021. In lieu of flowers, memorials may be given in his name to Wounded Warriors, or a charity of your choice. The family invites you to share memories with them at: Goresfuneralservice.com
Read Less

To send flowers to the family or plant a tree in memory of Jack Lee Mills, please visit our Heartfelt Sympathies Store.

We encourage you to share your most beloved memories of Jack here, so that the family and other loved ones can always see it. You can upload cherished photographs, or share your favorite stories, and can even comment on those shared by others.

Posted Dec 30, 2020 at 06:16am
I just learned about your dad's passing, Linda and family. I am so sorry. I am praying for you. Ann Uhnken Reddy
Comment Share
Share via:
LR

Posted Dec 07, 2020 at 06:13pm
Sending my heartfelt sympathy to Joanne, Jack’s children and the extended family and friends of Jack. A sudden death is always so much harder to embrace. May Jack RIP and rejoice with all of his loved ones who have transitioned before him. May all of you who grieve be gentle with yourself. May your memories bring you love and comfort.
Warmly,
Lora Bruder
Comment Share
Share via:
KF

Posted Dec 06, 2020 at 12:07pm
Chris and I are so sorry to hear of this gentle mans passing. We have known Jack as a neighbor and friend for six years and in those six years he has been a great neighbor and very supportive of anything we brought to the lake. Joanne and family.....our hearts are hurting for the huge hole that you have in your hearts.....
Love,
Kathy and Chris Finch
Comment Share
Share via:
PW

Posted Dec 05, 2020 at 01:28pm
I’m so very sorry to hear of the passing of Jack. We graduated from Kalamazoo Central together and now each lived in the Delton area. He was a great classmate! Please know that you, his family, are in my thoughts and prayers.
Pat Bell Williams
Comment Share
Share via:
SM

Posted Dec 03, 2020 at 07:24pm
Was a great person to work with at Azo airport for a number of years and we retired at the same time. Rest easy jack enjoy your comfort with the lord Stan. And Evelyn MacArthur
Comment Share
Share via: 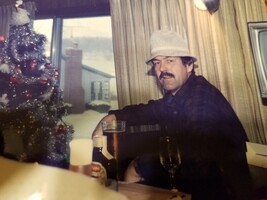